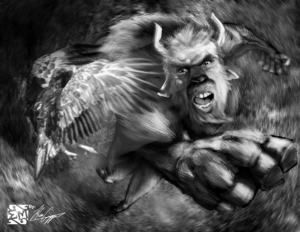 A group of adults and children, all H. transformans, were on a picnic with games for youngsters who were four to five years of age.  H’Assandra transformed into a golden eagle to keep watch overhead.  H’Ilgraith transformed into a lynx to patrol the area on the ground.
Suddenly, three high-pitched peals were heard as the golden eagle banked sharply toward something moving rapidly through the grass.  A deformed creature, a bisalcesoid, was thundering toward the picnic like a drunken battering ram.
Meanwhile, a lynx crouched in the grass. Just as the creature’s head came into view, H’Ilgraith launched her attack.
(Excerpt from H’Ilgraith.)

The adventures are easy to read, fun to read, intriguing, fast paced with exciting adventures….. [the] book successfully and excellently presents a dynamic portrait of H’Ilgraith that reveals how she became the character we first met in Homo Transformans.     —-Tacey Battley

Hybrids were human or animal species in which the genes of one species were mixed with those of one or more other species via genetic engineering methods. In hybrid humanoids, the base genome was Homo transformans, a human with the genetic ability to transform into another species of animal – usually a mammal.  The morally corrupt Cassius Foundation would insert the genes of one or more predatory animal species into an H. transformans, usually a male.  This was accomplished via a viral vector which transferred the genes into the victim’s DNA.  Subsequently, the H. transformans was forced into a transformation, which was abruptly stopped when the desired characteristics become apparent.  If the individual survived, the victim was unable to transform again and remained trapped in his or her transformed state.

Despite their appearance, hybrid humanoids were still humans whose physical and often mental state had been mangled by a malevolent organization.  Most were left mutilated and crippled.  The bisalcesoid was a hybrid humanoid in whom the genes of a bison (biso‒) had been spliced into the genome of an H. transformans (‒oid) who could transform into a moose (‒alces).  He was designed to be a beast of burden—to haul heavy objects (e.g., blocks of stone chiseled from a mountain or a wagon of logs from felled trees.  Although his physical alteration had been successful, the effects left him mentally deranged.

Gene therapies consist of adding a functional gene (hemophilia A), or replacing a defective gene (cystic fibrosis), turning off a gene (e.g., a cancer-causing gene), and editing genes (Cornel, et al., 2019; van Haasteren, et al., 2018). Viruses are a means to upload genes into human DNA (Lundstrom, 2018).   Viruses used for these purposes include adenoviruses, herpes simplex viruses, lentiviruses, and many others. Most of these viruses have been genetically modified themselves to remove the features that would otherwise cause disease.