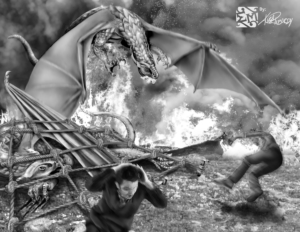 An adult red dragon had been searching for his wayward adolescent when he heard his youngster’s cries. With his keen eyesight, he readily located his offspring.  Hunters surrounded him and a lynx [H’Ilgraith] in their midst.

The adult’s first pass cleared away the hunters that had surrounded the lynx. These he promptly torched with his fire. H’Ilgraith quickly darted behind a large boulder which shielded her from the flames.

The dragon turned on the few remaining hunters who were fleeing in a panic. He could not unleash his fire upon them without risking harm to his youngster. So he dispatched them with claws, canines, and a whip of his tail.  (Excerpt from H’Ilgraith.)

“The author has created a cast of memorable characters who can transform into a variety of non-human animals to problem solve as they explore their changing world.  Beautiful illustrations supplement the story of interactions among humans, dragons, fox, owls, badgers, other critters.” S. A. Jarecki, Ph. D.

In contrast to the gray dragons, red dragons are stunningly beautiful both on the ground and in flight. They have iridescent reddish-brown scales that glitter in the sunlight of the southwest mountain range.  The arrangement of their keratin scales allows for the scattering of light by both interference and diffraction.  When dragons are in motion, their scales shift their positions just enough to adjust to the movement of the dragon’s body.

Red dragon scales typically cast an amber-red color with streaks of gold on the top of the head and back.  Different combinations of mineral salts offer additional colors when reflected by sunlight. Iridescent streaks of blue and green may be seen, as well.

Iridescence is a variable change in colors as a result of viewing an object from different angles.  It is caused by the refraction of light as it changes from one angle to another.  Changes in the angle can produce remarkable changes in color.  Iridescence can be found in many classes of animals including invertebrates (e.g., mollusks), insects (e.g., the butterfly), birds (e.g., humming birds), reptiles (e.g., snakes), and rarely mammals (Ducet & Meadows, 2009).  In birds, the iridescence comes from the orientation of keratin in their feathers, which contain thin films of crystals.

Keratin is the primary component of nails, claws, horns, and scales. Calcium and magnesium are two essential minerals found in these structures (Saeedi, et al., 2018).  In mammals, zinc, copper, and selenium are the three mineral micronutrients found in skin which contains keratin. Calcium, in the form of calcite can refract with several different colors.  Zinc refracts with a green color.  Along with vitamins A, C, D, and E, these mineral nutrients are essential to maintain healthy skin (Park, 2015).