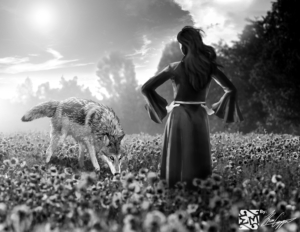 Ruwena (in human form) and Savannah (as a wolf)

When instances of human transformation first appeared, they seemed to be random and entirely spontaneous.  Initially, only a few individuals showed the ability to transform successfully. As more individuals transformed reliably, patterns of inheritance could be seen in their offspring.  Once members of Homo sapiens [H. sapiens] recognized that some of its members could transform into other species consistently and their progeny could do the same, a new species called Homo transformans [H. transformans] was declared.  (Excerpt from Book I, Homo transformans:  The Origin and Nature of the Species.)

The classic definition of a species is one in which individuals have similar physical characteristics (phenotype) and the ability to breed within their species (reproductive compatibility).  Since both H. sapiens and H. transformans have similar human phenotypes and can breed in human form, by the above definition H. transformans is not a separate species.

Yet there is no one definition of species (Aldhebiani, 2018; de Queiroz, 2007).  The biologic definition includes the characteristics described above plus genes that are comparable and compatible (genotype).  Since both H. sapiens and H. transformans have similar human phenotypes and genotypes and can interbreed, H. transformans would not be a separate species from a biologic perspective.  Two other definitions ‒ the morphologic and phenetic ‒ rely on members having similar physical characteristics that distinguish them from other species.  The evolutionary and phylogenetic definitions rely on the lineage of a species in which there is a common ancestor that has evolved along evolutionary lines (cladistic) while maintaining characteristics unique to that species.  Last but not least, the genetic definition of species relies on members being genetically related within their own group while being genetically distinct from other groups (Baker & Bradley, 2006; Varghese, 2015).  The genetic concept encompasses similar phenotypes and the ability to breed.

The Hominidae family includes the gorillas, orangutans, chimpanzees, and humans.  Chimpanzees are our closest relatives (Gagneux &Varki, 2001; Rogers & Gibbs, 2014).  We share approximately 96%-99% of our genes with them.  Although we have similar morphologies, there are several physical differences, one of which allows chimps to traverse tree canopies with the same elan that humans traverse asphalt highways.

Within the genus Homo, anthropologists have posited several different species of ancestral humans: e.g., Homo habilis, Homo erectus, Homo neanderthalensis, and others (Guimaraes, 2017; Stringer, 2016).  There is an on-going debate regarding whether or not these categories represent separate and distinct species of humans (biologic concept) or demonstrate the development of humans over millennia (evolutionary concept).  There is agreement, however, that Homo sapiens is the only extant (living) species of human.  If one accepts that there is only one species of modern human, then one can infer that all humans have the same basic anatomy and physiology, including comparable genetic and physical characteristics, and have the ability to breed with other H. sapiens.

The ability of H. transformans to become another animal, especially an apex predator, transformed human society.  Society shifted from a post apocalyptic state to embattled camps trying to find the genes that supported transformation.  The Cassius Foundation, a morally corrupt faction, and its key competitor, the Biogenics Corporation, were the primary rivals in an arms race.  Neither the Cassius Foundation nor the Biogenics Corporation hesitated to capture and use H. transformans in their research.  Both H. transformans and H. sapiens were caught in the middle. The two species could not be distinguished when H. transformans was in human form.  Thus, both species of human were at risk of being attacked and captured by bounty hunters who would sell them to the highest bidder.  (Excerpt from Book II, H’Ilgraith.)

Humans have chosen to further distinguish their species based on socioeconomic status, religious affiliation, political party, educational level, mental acuity, and a host of other factors.  Yet these artificial distinctions do not determine species.  Not even differences in physical traits – size; shape; height; weight; color of skin, hair, eyes; gender; dentition; visual acuity, et cetera – do so.  Although these differences are useful for identifying individuals, all too often they simply serve to categorize and segregate humans into groups based on personal and political opinions. Based on subjective preferences and biases, many people choose to use these characteristics to determine which members of H. sapiens have value and which do not.

Still, there is one biologic characteristic that does separate people into groups.  This characteristic is one you cannot see. Yet, it renders all other visible characteristics irrelevant.  It divides people – all people – into one of four separate and distinct groups.  Each group is labelled arbitrarily with a letter of the alphabet.  One is group A, another is group B, the third is group AB, and the fourth is group O (Mirtra, et al., 2014).  All medical personnel should recognize these groups immediately as should all military personnel, who have their group stamped on their dog tags.

The ABO blood group is universal among humans.  Outward physical manifestations and artificial distinctions have no bearing and no influence on an individual’s blood type.  Anyone with a compatible blood type can save the life of another person who needs a blood transfusion – regardless of differences in physical appearances or social distinctions.

So I propose that all members of H. sapiens step back, take a deep breath, and recognize that no human life should be disregarded.  Collectively, all human lives matter.  Individually, the life of any member of H. sapiens matters.

Addendum:  By extension, all life matters on this planet regardless of species.  Even mosquitos matter.  Certain species of bats feed on them.