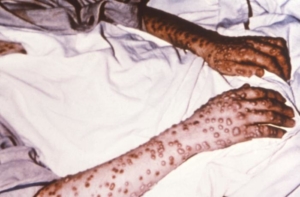 Black swan events are major changes in the population of a species.  Although they may include population explosions, they are most often catastrophic events associated with the collapse (crash) of a population (Anderson, et al., 2017; Simberloff & Gibbons, 2004).  Population crashes can be caused by drastic changes in the environment affecting the availability of resources (e.g., drought), invasion by competitors (e.g., invasive species), over predation, habitat destruction, and disease (Pederson & Greives, 2007; Simberloff & Gibbons, 2004; Smith, et al., 2009).
Most crashes are associated with wildlife and changes in the ecology; however, they can also occur in human populations in association with social events (e.g., war), financial events (e.g., market crash), as well as environmental events (e.g., potato famine) (Powderly, 2019).  Thus, black swan events can affect human populations as well.

There Is No New Thing Under the Sun

Infectious disease pandemics involving a variety of organisms have occurred many times throughout history.  All have had significant effects on the human population.  Some have changed the course of human history.
The Black Death (bubonic plague) killed millions of Europeans in the 14th century (DeWitte, 2014). Epidemiologic studies show it targeted the elderly and frail.  In doing so, it altered the characteristics of the surviving population.  Historical records revealed that there was a lower rate of infection and death in subsequent episodes of the plague.  This suggests that those who survived were more robust and may have had stronger immune systems.
Epidemics of smallpox (variola) frequently swept through Europe from the 7th century to the 18th century (Riedel, 2005).  The threat of small pox decreased significantly when Jenner discovered that exposure to cox pox prevented or blunted smallpox infection.
In the 1918 influenza pandemic, over 50 million people died world-wide (Short, et al., 2018; Taubenberger & Morens, 2006).  It swept through in three consecutive waves.  As of 2018, it was the largest pandemic on record.
As of 5 September 2020, there were 26.5 million cases of coronavirus infection world-wide.  Over 860 thousand have died from disease.  In the United States, over 6.4 million cases have been reported, and over 190,000 people have died from the disease.  If these numbers seem unimpressive next to those recorded in 1918, consider the changes in medical care over the past 102 years.  There were no mechanical ventilators in 1918. Even now, in a report by Auld, et al. (2020), mortality rate of adult coronavirus patients on ventilators ‒ as measured in six intensive care units across three hospitals – was over 30%.  Our coronavirus pandemic is not yet done.  A second wave is expected in the fall.

Those Who Fail To Learn From History…

…are doomed to repeat it…and we are.  We might be forgiven if we know aught of the 1918 influenza pandemic.  After all, it occurred over 100 years ago.  Even the outbreak of SARS in 2002-2003, may be too remote for many people to recall, especially young adults.  Yet the influenza epidemic of 2012-2013 occurred only seven years ago.
Presently, we are experiencing a coronavirus pandemic the scope of which is quite similar to the 1918 influenza pandemic.  As of this date, we have no cure for it and anxiously await a vaccine.  We rely primarily on supportive therapy, including the use of mechanical ventilators, and adjunctive medications to blunt the effects of the virus in those who have respiratory complications.  At present, many promising vaccine candidates are being tested.  Even once a vaccine is available, many people may not avail themselves of it any more than they do the influenza vaccine.
The influenza season is rapidly approaching.  Consider then what the mortality rate might be from co-infection with both influenza and coronavirus.  To minimize this risk, get the influenza vaccine as soon as it is available.  Then follow-up with the coronavirus vaccine when it becomes available.  Continue to use mitigation strategies – wearing a mask, washing hands or using hand sanitizer, and maintaining physical distances.  Hopefully, these efforts will keep the human population from having yet another black swan event.