Whither the Human Species

Home/Whither the Human Species
Previous Next

Whither the Human Species 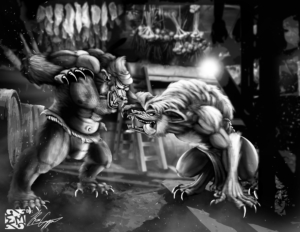 One of the crocutalupoids assigned to guard the storehouse had decided to sample some wine stored there.  The hybrid soon became inebriated and disoriented.  Subsequently, he developed an unsteady gait and uncoordinated movements.  He lost his balance and crashed into several barrels, crates, and storage bins as he tried to regain his balance.

One of the other hybrids, a cercopithursid, responded to the ruckus thinking the storehouse was being raided.  Instead, he encountered an agitated and aggressive crocutalupoid that turned and attacked him.  A violent fight broke out between the two hybrids.  The cercopithursid soon realized that his adversary was impaired, whereupon he quickly ended the crocutalupoid’s life.  (Excerpt from Homo transformans:  The Origin and Nature of the Species).

At one time, humans were categorized as Homo sapiens sapiens (Schmidt, et al., 2019; Semino, et al., 2000).  The second sapiens, which indicated a subspecies, has since been dropped.  It may be time to reinstate it.

According to the National Highway Traffic Safety Administration (NSTHA), in 2018 over 10,500 people died in traffic accidents involving alcohol-impaired (drunk) drivers (NSTHA, 2019).  It is illegal in all states to drive a vehicle with a blood alcohol concentration (BAC) of .08g/dL or above.  Of the 10,500 plus deaths above, more than 60% of drivers had a BAC level of 0.15 g/dL or greater.  Approximately 27% of the drivers were 21 to 24 years old.
Any agent that suppresses reaction time, causes sleepiness, or alters perception in a driver – e.g., alcohol, opiates, THC, or any combination of them – increases the risk of all drivers becoming involved in a fatal accident (Arkell, et al., 2019; Li & Chihuri, 2019).
Still, there is a subset of the human population who persist in driving under the influence of alcohol and other drugs which depress reaction time, cloud judgement, and lead to accidents with potentially lethal consequences.

Cigarette smoking leads to more than 480,000 deaths per year in the United States (CDC, 2020).  Exposure to secondhand smoke accounts for approximately 41,000 of these deaths.  The inhaled toxic gases lead to pulmonary diseases including lung cancer and contribute to cardiovascular disease (Hoffman & Sanchez, 2017).  The addictive power of nicotine has long been recognized (Benowitz, 2010).  More recently, its addiction has been promoted further by the use of e-cigarettes (Rapp, et al., 2020).
Still, there is a subset of the human population who insist on smoking tobacco or e-cigarettes despite their potential for causing life-threatening diseases and addiction.

Covid-19, also known as coronavirus 2 or SARS-CoV-2, is a novel virus not previously encountered in the human population before it began to spread in December 2019 (Singhal, 2020).  It spread rapidly and, in March 2020, the World Health Organization declared it a pandemic.  As of 10 August, the United States had 5,023,649 cases of coronavirus resulting in 161,842 deaths (CDC, 2020).
To minimize the further spread of coronavirus in the United States and around the world, the CDC and infectious disease scientists world-wide have advocated strongly that people wear a mask, maintain a minimum distance of six feet when engaging with other people, and avoid large densely populated gatherings.  They also encourage people to wash their hands frequently with soap and water, and use hand sanitizer when handwashing is not available.
There are many people who recognize the dangers of a coronavirus infection and take measures to avoid acquiring it or spreading it.  They are even willing to quarantine themselves to prevent further spread.  Unfortunately, there are many disadvantaged people who lack sufficient resources to protect themselves and their families.
Still, there is a subset of the human population determined to dismiss the above recommendations.  Some may believe they cannot or will not be affected (invincible) or that the disease is a hoax (denial).  If an individual wishes to risk harm to himself or herself, that is the individual’s prerogative.  Yet, he or she is not at liberty to deliberately pose a risk to anyone else.  To do so constitutes malfeasance.

Recommendation for Designating a New Subspecies of H. sapiens

I propose re-instating the subspecies Homo sapiens sapiens, a designation that identifies those members of H. sapiens who are rational and have common sense.  Given the reckless behavior of many humans, I propose a corollary subspecies, Homo sapiens stupidans, to designate those people who may have human intellect but are too bullheaded to use it.