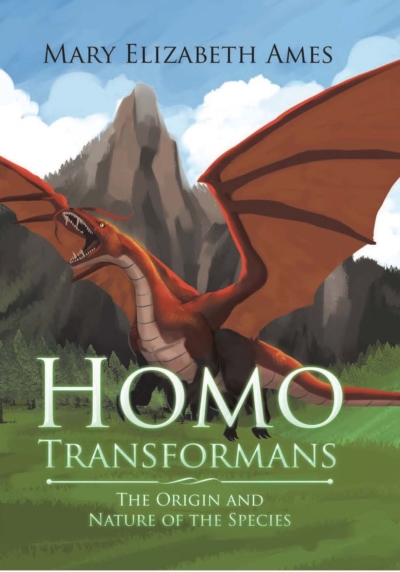 Homo transformans — The Origin and Nature of the Species

Approximately 175 years after Earth was struck by a gamma ray burst, a new characteristic began to arise in some humans. After many generations, humans appeared who were capable of transforming into another species of animal, most often a mammal. Overtime, the advantages of this new capability become apparent and, consequently, very valuable.

Two highly antagonistic factions, the Cassius Foundation and the Biogenics Corporation, competed with each other to achieve power and dominance in society. Both sought to exploit H. transformans to advance their own interests. Hence, H. transformans were hunted and captured for their abilities to transform or were killed for their genes. The Cassius Foundation, in particular, altered the genetic makeup of many species, including H. transformans, leading to enhanced capabilities in a few and striking deformities in most. 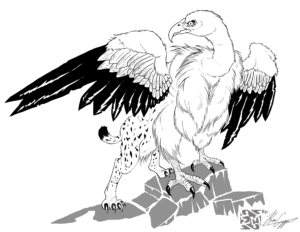 Communities comprised of H. transformans and sympathetic H. sapiens formed in an effort to protect and defend themselves from persecution. One of these communities, the House of Erwina, fostered a young H. transformans (Ruwena) with extraordinary abilities who presented herself as an H. sapiens. Ironically, many of her adventures obliged her to depend on her alternate species, while keeping her ability to transform a secret.

Ultimately, two factions emerged to determine the fate of the new species. With the balance of power and the preservation of H. transformans at stake, the defenders faced their mortal enemy in a battle they would not win.

Genotype [one’s genetic code] limited the individual’s options to assume the phenotype [visible characteristics] of another species. This was clearly evident in the number of alternate species Ruth could assume compared to those available to Edvar. Both had the complete genotype for a species of fox and for the gray wolf. Ruth, however, also had the complete genotypes for additional species.

Occasionally, Edvar and Ruth would go to a local freshwater pond fed by a stream. There, Ruth would indulge herself and transform into a river otter. She would frolic in the water while Edvar stood guard as a gray wolf. A native wolf would not hesitate to prey on an otter. So, on occasion, Ruth would tease Edvar with an otter’s rendition of a come hither look and then dare him to try to catch her (illus. 5).

Although wolves were fairly good swimmers, Edvar knew full well there was no chance he could catch Ruth in the water. Swimming underwater, a river otter could reach speeds of nearly seven miles per hour. Nevertheless, Edvar would accept the challenge and jump in to chase after her. Once they emerged on land, however, the tables were turned. Edvar would pounce on Ruth.

Edvar often wished he could become an otter and race through the water alongside Ruth. Alas, his genotype did not permit it. Still, both of them had the genotypes for a wolf and a fox, so both could transform into a wolf or a fox to travel together. 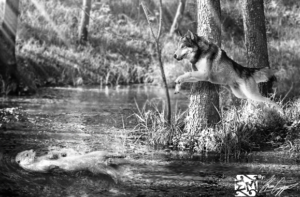 Chapter 12: Into the Boar’s Den (Excerpt)

There were both human and animal hybrids in the village. These hybrids were not corruptions. They were genetically engineered by Rafe to serve as laborers and guards. The latter were imbued with characteristics that would make them aggressive fighters. The majority of them were animal-animal hybrids in which the genes of one species were mixed with those of one or more other species. The crocutalupoid (cro-cu-ta-lup-oid) was one such a hybrid (illus.). It was created when the genes of a hyena and wolf were spliced into the genome of an H. tranformans. It was engineered to hunt large prey and fight an enemy.
One night, a crocutalupoid crept stealthily toward the shelter as if he were stalking prey. He was. This was how he viewed the two slight humans living together without any protection. As he crept closer, he heard no sound and saw no movement from the shelter. He paused as he approached the entrance. His prey seemed unaware of any danger. When he lunged to go inside, he was met with a violent attack from a ferocious animal with huge, curved claws on its forepaws and powerful jaws that could crush bones.
Part hyena, the crocutalupoid had a bite force of nearly 1,100 pounds per square inch, one of the most powerful of any mammal. He was unable to leverage it. His head and neck fit into the opening to the shelter; however, he couldn’t get his shoulders through the doorway. Meanwhile, his head, eyes, and snout were being ravaged by a badger* defending its den. 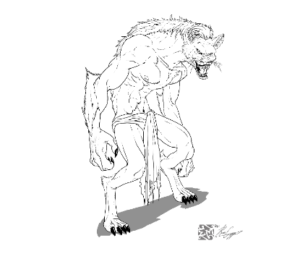 *Badger – a female H. transformans who can transform into a gray fox, a badger, a lynx, and a great horned owl.

The story is illustrated with 15 paintings of scenes − some whimsical, some dramatic − and 13 line art drawings of creatures from the book. The professional graphic artists of Epic Made produced these illustrations. (The author’s favorite is a spectacular painting of a great gray dragon creating a firestorm.) 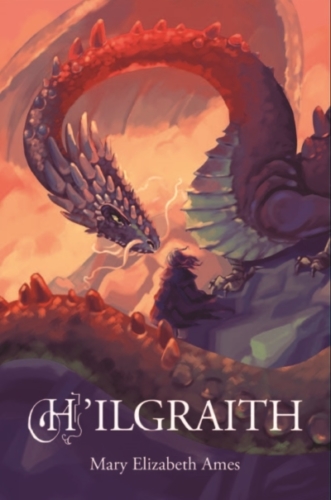 In the first book, Homo transformans: The origin and Nature of the Species, one of the characters, an old woman, played a pivotal role in saving and protecting a young girl destined to become Mistress of the House of H’Aleth. The old woman always seemed to know where to go and what to do. Her knowledge of medicinal plants, bizarre genetically engineered hybrid species, and her ability to communicate with dragons was extraordinary. She died without revealing her past.

H’Ilgraith, Sister of the House of H’Aleth recounts the story of the old woman above. It chronicles H’Ilgraith’s life and tells of her adventures during a time of escalating conflicts between the Cassius Foundation and the Biogenics Corporation. It reveals how her own personality and the characteristics of her alternate species – a gray fox, a lynx, a badger, and a great horned owl – forged an independent, resourceful, and driven individual. In a pivotal encounter, she confronted a gray mountain wolf who tested her patience and changed her way of life. 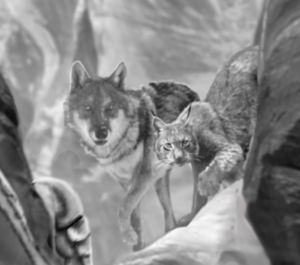 For a while, everything was quiet, and many people moved through the tunnel and fled into the woods. It did not last. An alarm sounded inside the compound. Suddenly, lights that had been illuminating the exterior of the fortress were turned inward. The compound lit up to the sight of people and animals running. Guards immediately began setting free their animal hybrids to run down the escapees: musticani, serojacutas, and theracapracani. The hybrids reached the forest well ahead of their guards. They were bearing down on people who were trying to disappear into the forest. 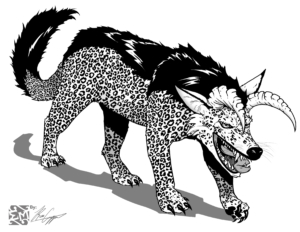 Chapter 27: Waterway to the Sea (Excerpt)

The scouts completed transforming once again into [a pack of] wolves for the trip back to H’Aleth. They had just left the outcropping when they heard a deep rumble and the sound of rocks loosening. It sounded like an earthquake; yet the ground was not heaving, and no cracks were opening up. Suddenly, a gale force wind blew across the area. A great gray dragon had arrived.
The scouts watched as the dragon spewed his searing fire across the entire section of the canal. It melted the mortar holding any stones in place. The heat of his fire fused together any stones that had collapsed. The entire structure was in ruins.
As the pack watched the dragon, they were mesmerized. His firepower was breathtaking. The dragon paused for a moment. He looked at directly at the wolves waiting just inside the forest. He sees us! 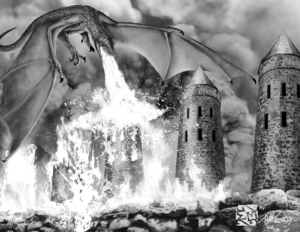 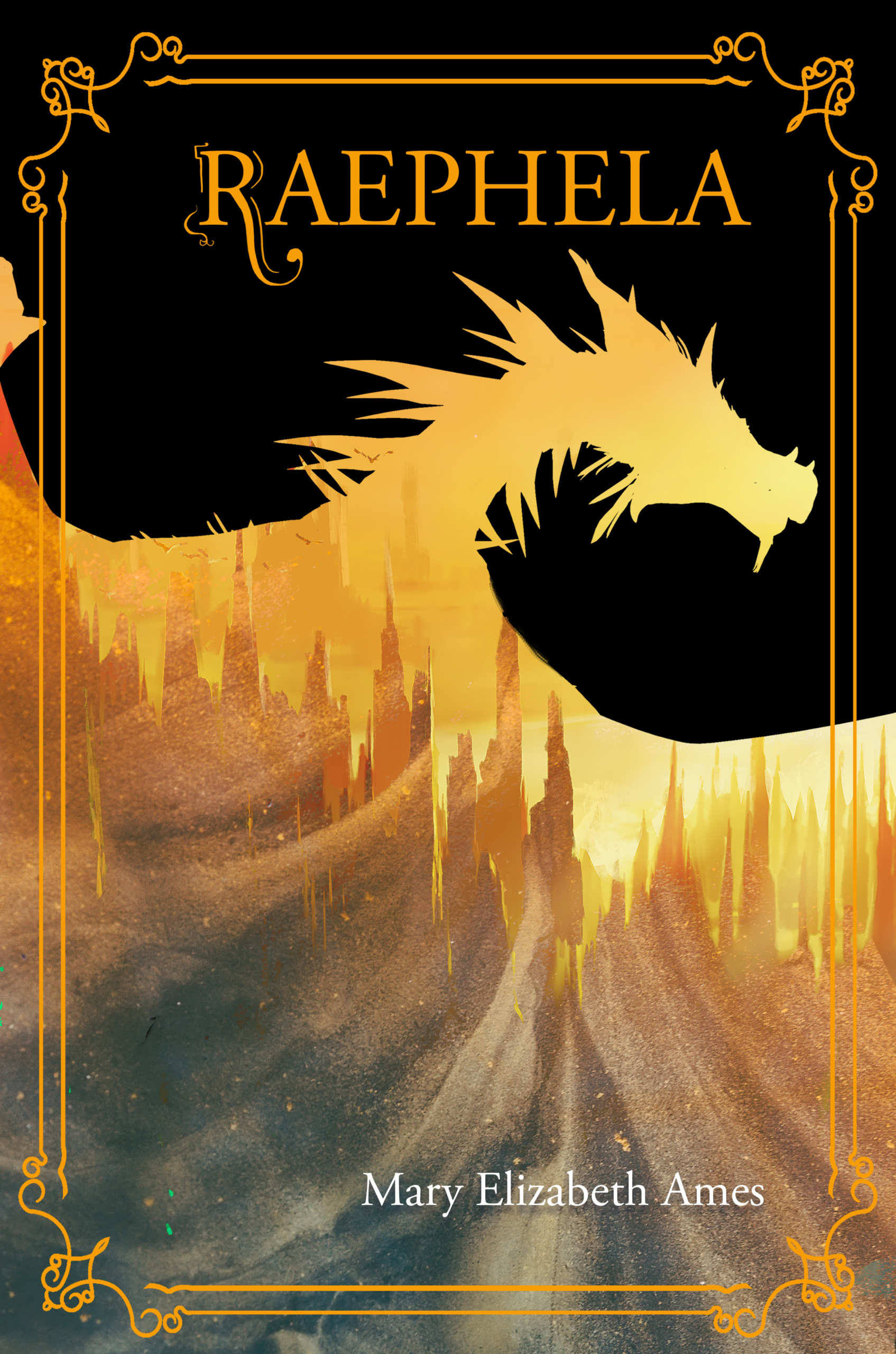 After the Cassius Foundation’s crushing defeat, communities of H. transformans and H. sapiens gradually recovered. Still they kept watch, certain that the foundation had not been wholly defeated. Meanwhile, Raephela, head of the Cassius family, seized the foundation’s reins and began its resurrection. She ordered her lieutenants to restore the army, and she dispatched hunters to capture H. transformans and H. sapiens alike to serve as enslaved workers.  Determined to rule everyone within her reach, she ordered her geneticists create evermore violent animal hybrids to terrorize and kill anyone that resisted her rule.  Allied H. transformans and H. sapiens joined forces to resist her suppression. Once again, an unforeseen entity determined the outcome. 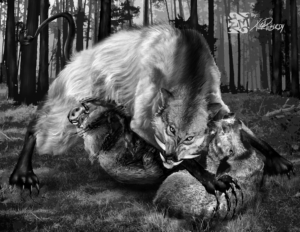 A band of hunters, seeking fossil remains, were traveling through a montane forest that spread out below the northern mountains. They had come upon a large granite outcrop that barred their way when they heard an animal crashing through the underbrush. A native white-tailed deer raced right past them, followed closely by a native brown bear. In seconds, the bear decided that easier prey was at hand and attacked the closest hunter.

Suddenly an airborne mammal appeared. It streaked through the canopy, diving toward the scene. A juvenile great gray dragon shot past the hunters, snatched the bear in its jaws, and flew out through the canopy. After the young dragon flew away with his prize, the hunters were relieved. They thought to take a moment and catch their breath—until the juvenile’s sire reared up from behind the outcrop and looked directly at them. 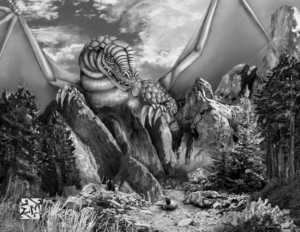 It was a beautiful day to go for a walk. The tundra was in full bloom with bright yellow and red poppies, blue arctic lupine, white Labrador tea, violet parraya, and lavender pasque flowers.

As Claren [an enemy spy] slipped outside, she gave a soft laugh and shook her head slightly. How lax their security is [referring to Gregor]. They must truly think their location makes them impregnable. Even their power source is unguarded, she thought mockingly.

She did not see the snowy owl, in its summer plumage, perched in a nearby copse of Norway spruce; nor did she notice the arctic fox, in its summer coat, hidden among the burst of flowers. She did see a magnificent caribou stag grazing not too far away. Unbeknownst to Claren, all three—owl, fox, and deer—were scouts, watching her and marking where she went. 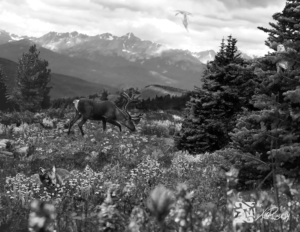 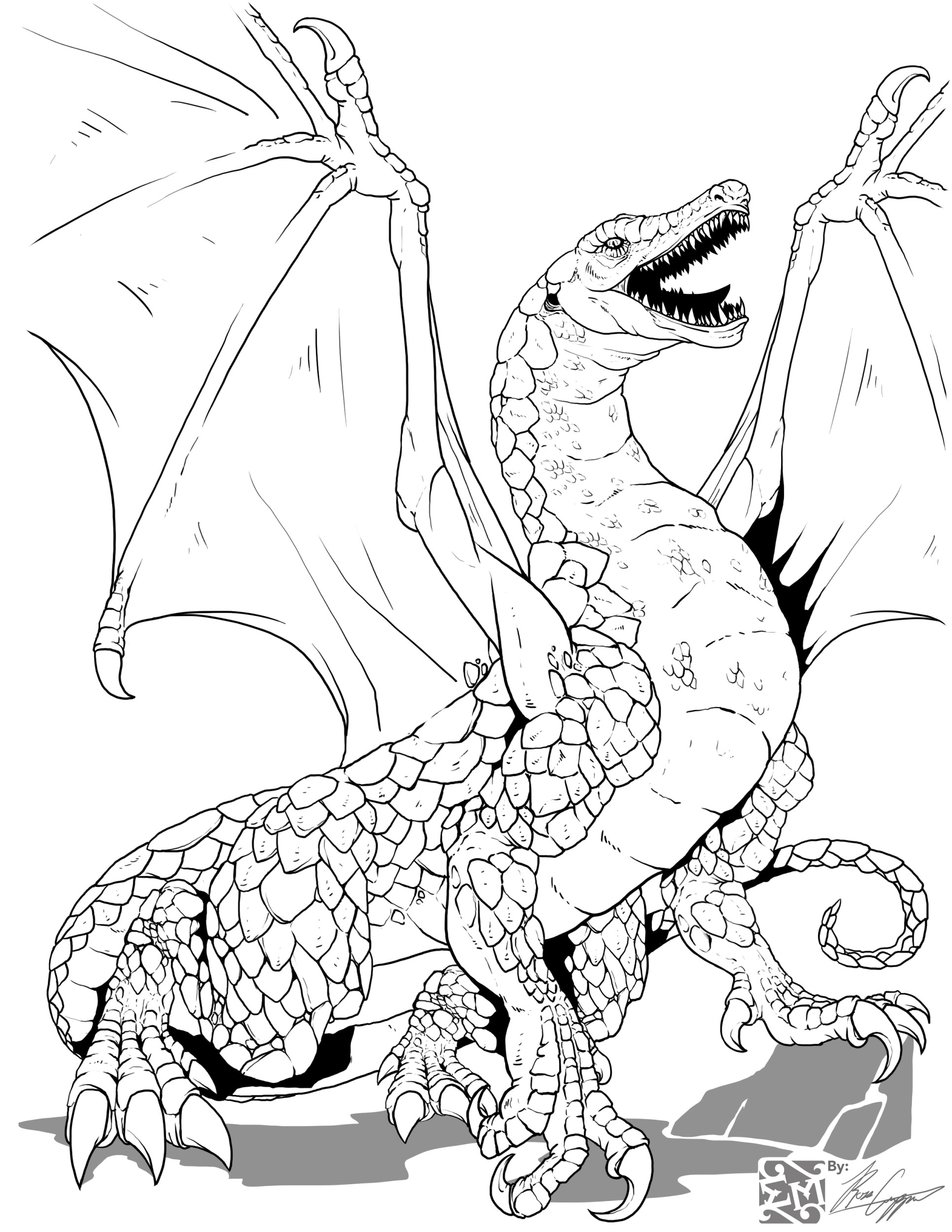 Dragons are among the earliest mammals to appear on Earth. They arose during the late Cretaceous Period. Over time, they settled into different environments, which led to the evolution of different dragon species. Despite their best efforts to avoid interactions with humans, ultimately they were drawn into human conflicts. 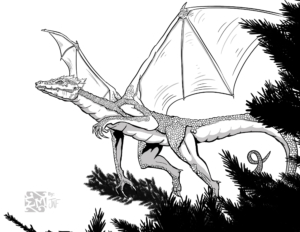 A group of young people were hiking through a patch of shrubs and bushes along the foothills when one of them stepped into a narrow hole. After retrieving his foot and lower leg, their comrade informed his fellow travelers that the hole had no bottom. Curious, the group moved closer to investigate it. Suddenly the ground shuddered beneath of them. They immediately scattered away from the hole.

From a distance, the group watched as the earth fell away, enlarging the hole to eight or ten feet in diameter. After a while, wherein there were no further tremors, two curious hikers gingerly inched their way toward the sink hole. As they moved closer, they saw the greyish-white tapered head of a dragon rising above the orifice. 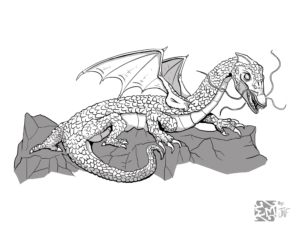