A Duel of Titans

Home/A Duel of Titans
Previous Next

A Duel of Titans 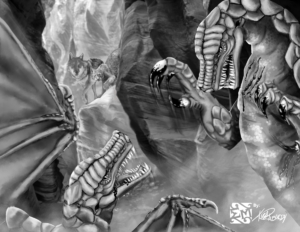 While traveling along a ravine, both H’Ilgraith and Jak felt earth tremors. Both of them became alarmed when they saw a large boulder shift and several rocks spill down the slopes. Fearful of an impending earthquake, the wolf and lynx raced through the ravine.
Before long, they heard low-pitched, deep rumblings echoing through the canyon. They also noticed that the wind had increased substantially, punctuated by short gale-like gusts that ruffled their coats and buffeted their ears. It felt like an impending storm, yet the sky was clear.
As they rounded a westward bend of the canyon, H’Ilgraith and Jak skidded to a stop. Two adult male great gray dragons were battling each other—biting, clawing, lashing with their tails, and using the walls of the canyon to launch at each other. Engaged in a ferocious assault, their open wounds were evident. This was more than a test of strength or a fight for dominance. The two dragons were engaged in mortal combat.
(Excerpt from H’Ilgraith.)

Ames dials up the adventure in this sequel to the educational Homo Transformans (2018), and she continues to offer informative tidbits about genetics and evolution, as in the line, “one could inherit a gene and even pass it on to offspring without ever experiencing its effects (gene expression).”  — Kirkus Reviews

Great gray dragons are the largest and most powerful of the terrestrial dragons.  Adult males stand twenty-four to thirty-two feet tall including the head and neck.  Their powerful tail is eighteen to twenty-four feet long.  Their wing span is forty to forty-six feet.  Their size makes lifting off from the ground cumbersome.  They typically need a running start ‒ reminiscent of an albatross; however, they can easily launch from their mountain aeries.

Grays are the top apex predator.  With a bite force of 1200 pounds per square inch, large serrated teeth, and a searing fire that reaches thirty-five to forty-five feet and can melt mortar, they have no natural predators.  Grays can reach a soaring speed of 180-240 mile per hour, and a diving speed 200-250 miles per hour.  Like a raptor, they have acute long distance vision and hearing.  They hunt from the air, sweeping down to grasp their prey without touching down on land.  As mammals, however, they also have a good sense of smell.

As a general rule, most dragons – including the red and arctic species – are social animals.  They live in extended family clans with an alpha pair.  There are lone males that may challenge a patriarch to take over a clan.  Rarely, a rogue – an immanis – will attack another dragon, typically a juvenile, without provocation and may cannibalize it.