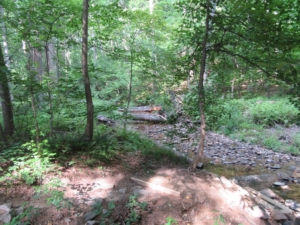 Prior to meeting H’Ilgraith, Jak had seen great horned owls from a distance; however, he had never actually encountered one. As a wolf, he dismissed owls as significant predators.  As a human, he said as much. H’Ilgraith made no reply.

One uneventful day, Jak patrolled a wooded area as a gray mountain wolf while H’Ilgraith conducted surveillance as a great horned owl. While Jak was looking away, the owl lifted off silently. Suddenly she screeched, drawing the wolf’s attention. When Jak turned toward the sound, he saw a sharp curved beak opened for a bite and long sharp talons fully deployed. They were aimed squarely at his head. He ducked to the ground just as the bird aborted her strike. The owl landed on a nearby branch and screeched at him again, saying, in effect, “Do not underestimate a raptor, even if it only weighs three and a half pounds.”  Jak got the message. (Excerpt from H’Ilgraith.)

“When characters travel in animal form and display their natural skills for acquiring food and avoiding predators, Ames’ prose channels the elegance of naturalist Sally Carrighar, who wrote One Day on Beetle Rock (1946).”  — Kirkus Reviews

The great horned owl is one of the largest owls.  It is a powerful bird for its size with talons that can exert nearly 300 pounds per square inch.  It can reach flight speeds of twenty to forty miles per hour.  Like all owls, they have broad wings for slow, silent flight and maneuverability.

Owls have exquisite hearing and vision.  They are farsighted and have sharp visual acuity even in low light.  By rotating its head, an owl has a visual field of 270 degrees.  Both their vision and hearing are highly sensitive to movement.  They have directional hearing whereby they can localize sound and target their prey precisely, even if they cannot see it.

The plumage of a great horned owl is reddish brown and grayish black on its back.  It has a brown breast with black and white bars.  Its tufted ears are not ears at all.  They are a collection of feathers which may help to camouflage the bird among the trees.