H’Ilgraith Synopsis and Description of the Story

Home/H’Ilgraith Synopsis and Description of the Story
Previous Next

H’Ilgraith Synopsis and Description of the Story 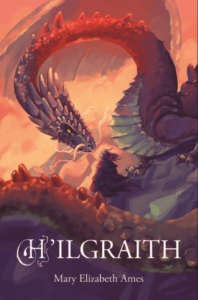 “With her new science fiction book, H’Ilgraith, Mary Elizabeth Ames continues to break the mold when it comes to conveying complex science within compelling fiction.  Ames fleshes out a character she introduced in Homo transformans: The Origin and Nature of the Species, which offers a different point of view into her futuristic saga about genetic disruption and experimentation. This is a morality tale about interdependence…. Whether read purely for the story or together with Ames’ well-placed scientific annotations and references, H’Ilgraith offers new insights into relating effectively with one another in an increasingly diverse world.
—-Cheryl Romanek, former Managing Editor for Creative Services at J.D. Edwards

…It is a fascinating blend of fantasy, science fiction, romance, intellectual engagement, exercise of will power, brutal fighting, ethical sensibilities, and familial loyalties…. Life and death ethical issues abound between competing groups and species, especially highlighting the deliberate interdependence of all life forms.  The profound flow of action alternating with science will keep the reader engaged and inspired.
—-Rev. Dr. Jerrold L. Foltz

H’Ilgraith recounts the story of a key character, first encountered in Homo transformans:  The Origin and Nature of the Species, who played a pivotal role in saving and protecting the future mistress of the House of H’Aleth.  It reveals how H’Ilgraith’s personality and her alternate species – a gray fox, a lynx, a badger, and a great horned owl – forged an independent, resourceful, and driven individual.  It relates her adventures as a young woman and describes how she confronted a gray mountain wolf who tested her patience and changed her way of life.  It also reveals how she came to care for an orphaned child destined to restore the House of H’Aleth.  (Originally published 21 February 2020)

In Homo transformans:  The Origin and Nature of the Species, the author establishes the foundation for the genetic ability of some Homo sapiens to transform into other species of animals.  In the story, she describes a mysterious character, an old woman, who rescues a young child when their village is destroyed by dragon fire.  In H’Ilgraith, the author reveals who the woman was and describes her adventures during a time of escalating conflicts between the Cassius Foundation and the Biogenics Corporation.  The time frame for H’Ilgraith falls between the establishment of H’Aleth and its subsequent fall generations later, as described in the first novel.

The author continues to thread the science of genetics throughout the story of H’Ilgraith, using the genetics of H. sapiens as the scientific basis for the story.  She provides additional explanations in supplemental notes for those readers who want more information.

The story is illustrated with 8 paintings of scenes from the book and 7 line art drawings of creatures depicted in the book.  The professional graphic artists of Epic Made produced these illustrations.  The story is fairly straightforward and easy to follow, so it supports many levels of readers.  Those who enjoy reading fantasy stories involving both real animals and imaginary creatures including dragons will find the story entertaining.  The story contains no foul language, sexual situations, or vulgarity.  It does contain scenes describing violent events, including death; however, there are no explicit or gruesome details.  (Originally published 28 February 2020)