Home/Fight or Flight
Previous Next 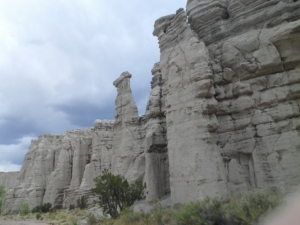 For a moment, no one spoke. Then, Weston said what no one wanted to hear. “We may have to flee farther into the southwestern region perhaps into the mountains or west into the desert.”

“Leave this fertile land and the forests and rivers that abound here?” spoke a councilman in disbelief. “Not without a fight,” he added vehemently.

“We do not have an army, nor was it ever our founders’ intent to have one,” said H’Assandra. “We must find a safe haven for the youngest of our members and for those among us who are too frail to mount a defense yet still can nurture our children.”

H’Assandra tasked Balthorean with finding places in the foothills and lower ranges of the southwestern mountains where H’Aletheans could shelter. “These places must not impose upon the red dragons’ range,” she insisted.

Plaza Blanca is a limestone rock formation located in the Chama River Valley, Carson National Forest, near Abiquiu, New Mexico http://www.city-data.com/articles/Plaza-Blanca-Abiquiu-New-Mexico.html.  It is estimated to be approximately 300-350 million years old.

Desert mountains and other geologic formations harbor a number of mammalian species that can adapt to desert conditions.  These include gray foxes, lynx, black bears, badgers, raccoons, peregrine falcons, and (imaginary) red dragons.

Red dragons are the smallest of the three most common terrestrial species.  They are very colorful with iridescent reddish-brown scales mixed with gray and gold tones.  Different combinations of mineral salts offer additional colors – iridescent streaks of blue and green may be seen.  Their scales reflect sunlight and can dazzle the eyes.  Their lighter and more slender body makes them faster and more agile than the gray dragons.  Hence, red dragons have a soaring speed of 160-220 miles per hour and a diving speed of 250-300 miles per hour.

Red dragons live in the southwestern territory of H’Aleth.  They occupy the higher elevations of the southwestern mountain range and rarely descend into the foothills.  If H. transformans are forced to flee into that region, those whose alternate species includes a native southwestern animal could adapt quickly to living in a desert environment.  It would be prudent, however, to seek shelter in the lower foothills.  Alternate species are also prey species for red dragons.