The Knotty Problem of Conservation of Mass

Home/The Knotty Problem of Conservation of Mass
Previous Next

The Knotty Problem of Conservation of Mass 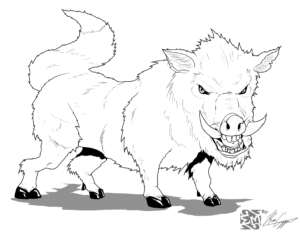 From Homo transformans:  The Origin and Nature of the Species

The gray mountain wolf [Matron Kavarova] encountered the scent of a hybrid animal.  She immediately snapped a deep growl to Master Xavier.  Master Xavier knew exactly what it meant.  Matron Kavarova had detected another being – a potentially dangerous one.

Suddenly a large creature appeared and lunged at them.  It looked like it was part wolf, part boar with the snout and horns of a boar and the body a wolf except for its short legs and hooves.

Ruwena knew this kind of creature.  It was a lupuseroja.  Cassius had spliced the genes of a boar into the genome of a wolf.

The lupuseroja found itself facing a large, ferocious mountain wolf.  It continued to lunge forward as the wolf fought to drive it back.  Suddenly, the wolf lost her footing on a slope and fell on the rocks sliding toward the lupuseroja. The lupuseroja saw its chance for a kill and leaped toward the wolf.  It never reached its quarry.  Out of nowhere a tawny brown cougar [Ruwena], going for a kill of its own, leaped over the wolf and collided with the creature head on.  (Excerpt from Homo transformans:  The Origin and Nature of the Species.

In Homo transformans:  The Origin and Nature of the Species, some humans have the capability of transforming into other species of animals.  Some of these species have comparable sizes and body conformation to that of a human.  For example, an adult female gray wolf can weigh between 50 and 120 pounds, whereas an adult human female can weight 80 to 170 pounds. An adult human customarily stands and walks upright, leaving the arms and hands free for other activities.  Yet, a human can travel on hands and knees or crawl on the belly, if necessary.  The wolf normally stands and walks on four legs, yet it can rear upright on its back legs, if necessary, and will crawl on its belly when stalking prey.  Thus, a human has a body configuration, weight, and overall mass that is roughly comparable to a gray mountain wolf (Madame Kavarova) or a cougar (Ruwena), both powerful apex predators.

The same argument cannot be made so readily for other species of mammals.  Consider the bear, another powerful apex predator.  Depending upon the species, a brown bear can weigh 550 pounds to over 1,500 pounds.  Standing upright, its height can range from 8 feet to 10 feet.  Black bears weigh 200 to 500 pounds and stand 5 to 7 feet tall upright.  The average weight for a human male is under 200 pounds, depending upon height.  As a general rule, humans rarely weigh over 400 pounds; however, some recorded weights have exceeded 1,000 pounds.  The average human height is 5½ feet to 6 feet. Similarly, some humans reach a height of 7 feet, rarely as high as 8 feet.  Although these extremes of weight and height are rare, they are possible.  (Typically, the cause is an endocrine disorder.)

Changes in how the mass is distributed could also be a factor.  Changes in bone mass or muscle mass are possibilities.  Muscle tissue is much denser than fat tissue and weighs more, and bones are even more dense and heavier.  So, theoretically, a very large human could become a bear without violating the rule of conservation of mass – at least, not by too much.

On the opposite end of the size scale, there are animals much smaller than the average adult human.  Both Matron Kavarova and Ruwena could transform into a fox (10 to 30 pounds, depending upon species) and an owl (less than 1 pound to 8 pounds, depending upon the species). At least the fox is a mammal with a comparable configuration, if not size.  The owl, however, is another class of animal altogether with a top weight comparable to that of a newborn human infant….plus wings.  Fortunately, wings are considered extremities; so, technically, birds have 4 extremities, too.  Nevertheless, one has to suspend belief and the limitations of science to think a human could become a bird…or a dragon.

Body size is affected by a wide range of factors including but not limited to genetic profile (genotype), nutrition, and the influence of endocrine hormones (Kemper, et al., 2012). There is no single gene or set of genes that govern physique (morphogenesis) (Müeller, et al., 2018).  For example, the family of Hox genes directs the development of a human’s upright posture (axial skeleton) (Quinonex & Innus, 2014); however, many other genes control overall growth and development (Tumaneng, et al., 2012).  Genes also direct the production of growth hormone, thyroid hormone, insulin, and other growth factors which are essential for growth and development (Leevers & McNeil, 2005).

The presences of any given gene does not mean that the gene will have an effect.  There are a number of factors that determine whether or not a gene is active and whether or not it will have a visible effect (expressed in the phenotype).  Ironically, none of the processes alter the gene itself; yet the can have dramatic effect on body shape and size.  For example, one member of a gene pair ‒ donated either by the mother or by the father ‒ may carry a genetic “stamp” (imprinting) which turns that gene off (Pacchierotti and Spano, 2015).  Similarly, one gene (e.g., for black hair) may dominate over another (recessive) gene (e.g., red hair).

Adequate nutrition and the metabolism of essential vitamins can influence the activity of a gene, turning it on or off (Selhub, 2002).  Spina bifida is a classic example https://ghr.nlm.nih.gov/condition/spina-bifida.  It is a birth defect of the spine in which the spinal column does not fuse properly and part of the spinal cord protrudes from the defect.  If not prevented or corrected surgically, permanent paralysis below the level of the lesion can result.  Inadequate consumption of folate (a B vitamin) during pregnancy may lead to spina bifida.  Countries that have mandated the addition of folate to flour have observed a dramatic reduction in the incidence of spinal bifida.

To date, there are about 50 genes (and counting) that have been associated with obesity.  For the vast majority of people, this aspect of body size is strongly influenced by environmental factors.  Alas, there is no magic wand for this disorder.  Transforming into another species of animal will not change your human shape when you resume human form.  The solution still remains diet and exercise.