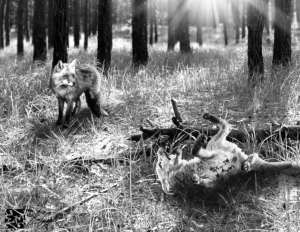 Woodland Frolic
From Homo transformans:  The Origin and nature of the Species
Illustration by Epic Made

Quite often at my author book signing events, an individual inquires why I wrote the novel Homo transformans:  The Origin and Nature of the Species.  My goal is to inform people about genes – what they are, how they work, and factors affecting how they function.  By weaving genetics into an entertaining science fantasy, hopefully people will be able to understand the implications of genes in health and disease.  The story of H’Ilgraith, Sister of the House of H’Aleth, continues to explore the role of genes.

After reading these stories, I hope people will be able to listen critically to what they hear and read in advertisements, and ask questions regarding the appropriate use of gene therapy.  In my opinion, understanding gene functions is essential in an age of genetic engineering.

Additional themes relevant to issues we face in society now are threaded throughout both stories.  These include discrimination based on genetics and physical features; the rifts in society that discrimination creates; human trafficking and the misuse of people because of their abilities or lack thereof; and ethical issues regarding the use of genetic engineering and the deontological ethics that should govern its use.

In addition, I hope to instill in both parents and children the notion that even young children – ten years of age and older – can develop a sense of responsibility and act responsibly, especially in a setting where their survival depends on it.  The protection of wildlife and preservation of habitat is another thread throughout both narratives.  It is an essential element in these stories since those who are H. transformans spend much of their lives as another species of animal.