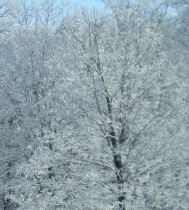 When winter term began, the compound was covered in snow.  For once, Ruwena was glad she did not have to go outside.  Winter in the Cassius village had been brutal.  It lay further north, so the cold temperatures and the wind had made a life of hardship even worse.  Snow was common, and snowstorms would bring inches to a few feet at a time.  If enough snow fell, Ruwena and her mistress used it to build a wind break against northeasterly winds, thus protecting both the fire and their doorway.  Without protection from winter weather and a fire for warmth, mortality from hypothermia was high for both humans and hybrids.  They would die if left exposed to severe cold or winter storms for too long.  (Excerpt from Homo transformans:  The Origin and Nature of the Species)

Hypothermia is defined as a core body temperature of less than 95oF (35oC) (Fudge, 2016).  Environmental conditions affect the risk of developing hypothermia. Freezing temperatures, wind chill effects, humidity, and prolonged contact with cold surfaces are risk factors.  Personal factors affecting the risk include having warm, dry clothing and the availability of shelter.  An additional physiologic factor is the individual’s ability to maintain a normal body temperature under normal conditions.

Even individuals with normal responses to cold can be overwhelmed by cold environmental conditions (cold stress).  The elderly have relatively poor internal regulation of body temperature and may not be able to compensate for even mild cold stress.  The frail elderly or those over 85 years of age have the highest death rates for hypothermia (CDC, 2019).

Be sure to dress warmly and avoid exposing skin surfaces to intense cold.  Face, ears, nose, fingers, and toes are prone to frost bite.  Consider donating coats, scarves, and gloves in good condition to organizations that will provide them to people in need. Consider also donating canned goods to food banks or volunteering in organizations that provide hot meals.  Check on elderly neighbors or family members to see if they have adequate heat in their homes.

Do not leave a fireplace fire, heated stove, or lighted candle unattended.  Keep combustible materials away from flames and space heaters. The majority of accidental house fires are caused by cooking, heating, and smoking (Ahrens, 2019).

During the winter, it was not uncommon for snow to blanket the compound due to its proximity to the northern mountains.  The arrival of snow was greeted with delight by most of the students.  Older students would be drafted along with the faculty to clear walkways to all the buildings around the courtyard.  It was during such times that the students needed to be wary.
Suddenly, a Form IV senior was struck in the back by a carefully aimed snowball.  This was followed immediately by a salvo of several more snowballs some of which hit their target—a student—and some of which didn’t.  Across the courtyard behind the students, several faculty members had furtively built an arsenal of snowballs.
Someone shouted, “Take cover!”
(Excerpt from Homo transformans:  The Origin and Nature of the Species)