Home/Appreciate a Dragon
Previous Next 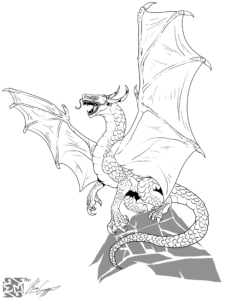 Illustration by  Epic Made

Rafe [Cassius] knew he would have to be very careful in what he said when he addressed the dragon.  Dragons were very perceptive.  “I will provide the dragoness with food and water and treat her wounds,” he announced to the dragon.  He said nothing about healing her broken wing.  “I will keep her alive in return for your services.”

The dragon listened to Rafe’s proposal with suspicion.  He had discerned that Rafe was quite capable of deceit, and he sensed many half-truths in what he said.  The dragon considered this offer briefly and countered with one of his own.  “I will fight for you if an enemy force enters this region,” he replied.  “If my dragoness continues to decline or dies, this agreement will be null and void as will you and your men.”

(Excerpt from Homo transformans:  The Origin and Nature of the Species.)

Dragons are engrained in the mythology of many cultures, and are key characters in literature, film, art, and even games.  They come in all shapes, sizes, and dispositions:  baby pet dragons, such as Hagrid’s Norbert in J. K. Rowling’s Harry Potter; a valiant ally, such as Saphira in Eragon by Christopher Paolini; or a deadly enemy, such as Smaug in J. R. R. Tolkien’s The Hobbit.  This essay is in recognition of Appreciate a Dragon Day, which is celebrated yearly on January 16th.

I thoroughly enjoy fantasy stories that include dragons as key characters, which is why I have them in my stories.  In most fantasies, dragons are treated as mythical creatures that often possess supernatural capabilities.  In my stories, they are another species of mammal, a member of the ancient monotreme lineage, which includes the duckbill platypus and spiny anteater.

My dragons have many characteristics that can be found in other mammals.  These include echolocation (e.g., bats, dolphins), electroreceptivity (duckbilled platypus), nest building (e.g., raccoons, squirrels, skunks), both parents raising offspring (e.g., primates, foxes), and powered flight (bats).  Like many other mammals, dragons are quite intelligent. They can solve problems and use tools (e.g., chimpanzees, elephants, dolphins).  They can use their strong jaws and talons to pick up objects (e.g., rocks, branches), build a structure (e.g., a nest) or tear one down.  They are also social animals and live cooperatively in clans.

My dragons diverge from typical placental mammals in three main ways.  Firstly, they lay eggs – a physiologic characteristic of monotremes.  Secondly, they can spew fire on exhalation and, therefore, are known as “fire-breathing” dragons.  This should not seem too far-fetched.  The constituents that comprise the fire are real and are stored in glands at the back of the dragon’s throat.  The cobra, a reptile, can spew its lethal venom via contracting glands in its throat.  Thirdly, dragons can understand and speak with humans, which allows them to communicate with people.  This is a bit more far-fetched.  Several species of animals can accurately mimic human language; however, they cannot use the words they have learned in a meaningful way.  Conversely, many animals can learn what specific words mean provided they are trained to recognize them.  Yet, their vocal structure does not allow them to speak the words they recognize.  Alas, despite their mammalian characteristics, my dragons are still creatures of fantasy.

Like the Serengeti lion and the Amazon jaguar, the great gray dragon1 of the Northern Mountains is the terrestrial apex predator, followed closely by the white dragons2 of the Artic, and the red dragons3 of the Southwest Mountains.  The marine apex predator is the oceanic blue dragon4.  These are the species of dragons most commonly encountered by humans.  There are many more, including subterranean, fresh water, and tree-dwelling species.

Humans are the only species known to hunt dragons.  Chicks that cannot make fire or fly are vulnerable; however, they do not leave their aerie until they have fledged.  Even then, an adult is always nearby.  Hunters have been known to kill an adult dragon by overwhelming force of arms.  This is extremely rare.  It can only be accomplished by a projectile successfully launched from beyond the range of a dragon’s fire (e.g., cannon fire).